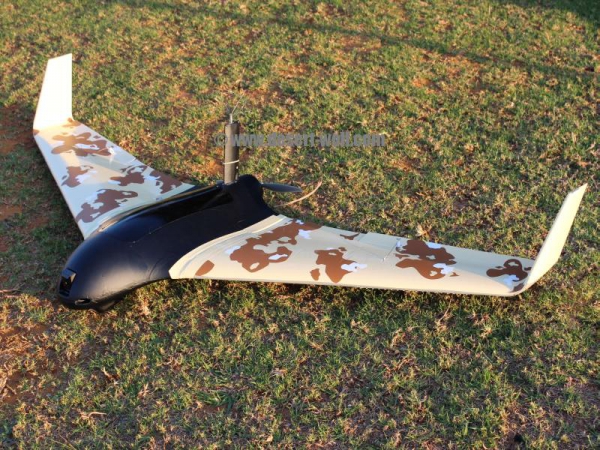 The Bateleur provides unrivalled capability at an unrivalled price. Used as part of the "perching UAS capability" or as a stand-alone system, the Bateleur is the choice of distinction. The Bateleur is an easy to operate, high-performance UAS system which provides advanced situational awareness for its customers.

With the Bateleur system you have the ability to execute almost immediate, on-demand reconnaissance missions to obtain detailed intelligence, surveillance and reconnaissance (ISR) data in real-time without risking the lives of pilots and operators. The Bateleur is an excellent choice and has been designed for special operations and tactical missions for “over the hill” non line-of-sight operations and situations.

The Bateleur family can be deployed in any terrain; the total system is man portable and launched utilising an effective and robust catapult launcher. Landing is either autonomous if the terrain allows for a 100 m open area or parachute landing in very difficult areas.

The Bateleur family carries both an electro-optical (EO) system and a FLIR infrared (IR) camera system in a digitally stabilised gimbal payload bay. The Bateleur modular design allows for rapid sensor changes and mission-specific preparations to meet the needs and demands of military and commercial customers.

Operating the Bateleur family is easy and does not require personnel with “pilot skills” or aeronautical abilities. The system is almost fully “autonomous” and needs very little user input. Having said this, the system will also allow for the more demanding user to take control of the UAS during specialised operations, again without risk to the system. With years of developmental experience and in-field experience, Desert Wolf has consistently delivered systems that are robust and of an excellent quality, all hallmarks of the Desert Wolf tradition.

Within a couple of  minutes of arriving at the mission site, the Bateleur can be assembled and placed on the catapult launcher ready to start the mission. Due to the various design choices, relatively small size and choice of electric-powered drive systems, the Bateleur is very difficult to detect, thus giving the operator a tactical advantage.

The Bateleur usually operates at heights of between 30 to 100 metres but, depending on the mission, could go up to 1000 metres with ease. The operation radius of 30 km allows for proper surveillance of the target area. With a total duration of 60 minutes airtime and a cruise speed of 100 km per hour, one can do a round trip of 50 km and back. Due to its powerful drive system, operating in 60 km wind conditions can still be undertaken.

The Bateleur can be fitted with up to three EO cameras and one FLIR IR camera. Two of these will be HD wing-mounted video recording systems, one EO will be forward looking for flight and navigation control and the bay-mounted FLIR IR camera will be downward-looking for area surveillance. The bay-mounted system will also then be the stabilised system.

Depending on the type of mission, the user can choose to have the bay-mounted unit operating as a stabilised HD EO video camera as well. With on-board recording capabilities, one does not have the risk of “losing” any reconnaissance information, even in the event of link interference or jamming. This allows for detailed information to be made available for full analysis after the mission and storage for long-term use.

More in this category: Hawk Aerial System »
back to top